When Deborah Buck was at Trinity College in Hartford, one of her textbooks, “Janson’s History of Art,” included no female artists. Art was considered a man’s world even out of the textbooks.

“The greatest compliment, in the ’70s, that you could get is ‘you paint like a man’,” Buck says

But Buck had a male mentor, abstract expressionist Clyfford Still, who believed in her.

“He said to me, ‘No one can teach you to paint. Learn everything you can about religion, science, philosophy and the world. People will respect your art if they respect your knowledge of the world you’re commenting on’,” she says.

Buck took his advice and became a well-respected artist, educator, designer, gallerist and collector. An exhibit of her latest acrylic-and-ink paintings is on show now at her alma mater. 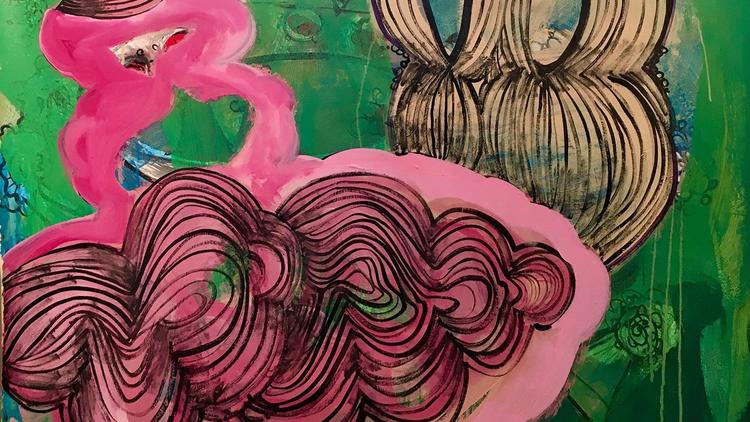 Deborah Buck names her artworks to give an idea of her thought processes while creating them. This is "Easter Parade." (Deborah Buck)

Buck traveled and studied widely and draws her artistic inspirations from a wide variety of sources. When creating art, Buck keeps her feminine sensibility. She can see this sensibility in the work of others. Buck says when she visits an art gallery, she plays a game with herself, “man or woman?” to guess the gender of the artist who created the work.

“I’m pretty good at it. I can guess most of the time,” she says.

Many of her works in the Trinity show depict traditionally womanly signifiers: wigs, skirts, fans, tassels, beading. She refers to each of her paintings as “she.”

An essential element of these isolated worlds is the layers of ink Buck lays on top of the layers of acrylic paint: “The ink congeals the image, the content, the subject. It animates these forms.”